Did you know that Canadian immigrants save more money?

WARNING: This article is full of stereotypes, generalizations, and simplifications. Just like all of my stories.

Usually, immigrants are portrayed by the media as struggling households, working low-paying jobs and barely getting by. Well, here’s some rather shocking statistics for you:

- According to BMO Harris Private Banking, roughly half of all wealthy people in Canada are immigrants or 1-st generation Canadians. This means they either immigrated to Canada or were born here to immigrant parents and thus inherited some of their habits. At the same time, 7 out of 10 of them built their wealth from the ground up. They started at zero, and reached the millionaire status with their hard work.

- According to study done by Purvi Sevak and Lucie Schmidt, immigrant households are ahead of native households in terms of wealth accumulation. In simple terms, immigrants save more money than native Canadians/Americans of the same age. They might not make as much money as their counterparts, but they end up with more wealth in their coffers.

How’s this possible? How come people who came to Canada/US from third world countries sometimes barely speaking English and in most cases with no marketable skills are so far ahead in terms of personal finance than people who lived here for generations and thus supposedly should be ahead of them? Let’s figure it out together. 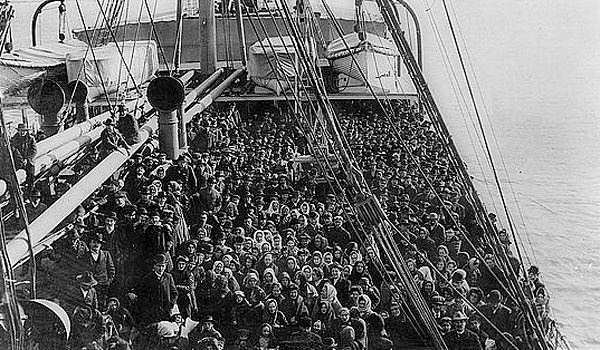 I happen to be an immigrant myself. Years ago, my family (dad, mom, me, and my brother) moved to Canada from Russia. My parents thought Canada provides more opportunities for people, and is also more stable socially and economically. So trust me, when it comes to being an immigrant, I have firsthand experience.

Why do immigrants save more money?

Being an immigrant myself, I can completely understand the underlying causes for  this phenomenon. See, immigrants might wear the same clothes as you, and drive the same roads, but being outsiders gives us a bit of advantage due to cultural differences. Immigrants save more money because they think and live differently. They also have different habits when it comes to money, and as a result a lot of them end up wealthy.

1. Immigrants hate debt and have very little of it

First of all, not many banks will lend money to people without credit history/credit score. Banks only lend money to people with history of repaying their debts because they kind of want their money back plus a little something. But when you arrive here from another country, you have a completely blank history of borrowing. Banks see it as high-risk lending, and prefer to lend to more stable crowd.

Second, immigrants are not used to institutional credit as a concept and generally don’t trust banks. As a result, they tend to save more and generally are more disciplined with money. Cash is king, like your old-school grandmother probably used to say. If you don’t have cash, you don’t spend money. Immigrants save more money not just for retirement, but for all other major purchases because they save money instead of borrowing. You want to buy something expensive? You set money aside for months and sometimes years until you save enough to buy it outright. Borrowing from an institution is very foreign to immigrants.

If you have no debt, you have more money to save and invest. If you don’t waste money on interest payments just so you can have the latest gadget sooner, you end up with more money in your pocket. So, having very limited debt lets immigrants save more money.

Immigrants in most cases come to Canada/US from poorer countries and modest means (otherwise, why would you move here?). They’re used to having less and not enjoying finer things in life. What would be considered “poverty” by most people here passes for normal living in our countries of origin.

Example #1: Having only one car in your household or owning an older vehicle is considered as signs of struggle in Canada/US. But check this out - when I was growing up in Russia, we had no car at all. My brother and I walked to school every day (uphill both ways!) and my parents used public transit for going to work. Having a family car was viewed as utter luxury, and far from everybody could afford it. Ever since then I have very low standards when it comes to personal transportation and feel completely content with driving an almost 20-years old car with no power windows. As a result, I don’t waste money on lease payments or finance charges.

Example #2: Houses in North America are enormous. And you don’t have to be from a stereotypical “poor” country to say that, even people from Western Europe will tell you the same thing. Where I come from, living in an apartment is considered perfectly normal, while living in a single family housing is something that only very wealthy families can afford. So, now you can understand why most immigrants don’t need to buy large expensive houses and prefer to live in more economical dwellings and save more money as a result.

Same goes for most household spending. Having more than one television set in our house feels like overkill. Chasing clothing trends and latest electronic gadgets seem unnecessary waste of money. Going out to eat to a restaurant and spending money on food while there’s a perfectly good dinner sitting in your fridge is just weird to immigrants!

3. Immigrants work their butts off

While immigrants don’t get the highly paid jobs, they compensate for it by working an extra job (or two!) on a side. They’ll come on weekends for some extra work, they’ll volunteer for working on stat holidays, and they’ll work side gigs in spare time - whatever it takes to bring more income.

It doesn’t mean they work like this all their lives! They might work like this for the first 5, 10, or even 15 years after coming here. But at some point their savings and assets grow to the point where wise investing takes over, and working for money becomes less of a priority. At this point, a lot of them ease off gas, and let money they’ve saved produce more money so they don’t have to. Makes sense?

Years ago, when I got in trouble with college debt, I worked two jobs all summer to pay it off. And by working all summer I mean every single day for four months in a row including weekends and holidays. While some of my friends though I’m a bit nuts, it was worth it when I paid off my debts completely with all my extra earnings.

Even right now, working a “normal” Monday to Friday job, I feel guilty for doing nothing on weekends, and always look for ways to be productive. Heck, I think this blog came to be simply because I was looking for something to do in my spare time.

Want to save more money? Manage your money like an immigrant.

Work hard, spend less, and have no debt. Say no to unnecessary spending, and try to increase your income. This is how immigrants save more money. Any financial advisor will tell you these three things will put you on a road to wealth.