You know what really grinds my gears sometimes?

I’ve noticed - any time you see an asterisk (fancy way of saying “star symbol”), it means you’re about to step into a mine field. It might as well have a skull and bones in it. Watch where you step, and read carefully whatever is on the bottom.

Of course, in much smaller print it says “bi-weekly, on approved credit”.

Consumers have been fighting stores, corporations, and dealerships trying to outsmart each other for a long time. I must say, sadly we’re losing. Bi-weekly car payments is just another type of ammunition they’re using against innocent consumers with devastating results. 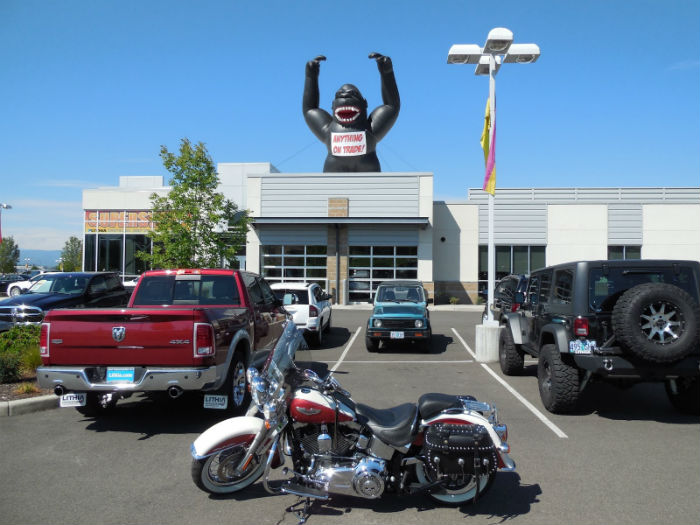 Especially when it’s plastered against a very nice car like Dodge Challenger (yay!) or Dodge Caravan (bleh). Who wouldn’t want to have a brand new car if your used car is starting to give you headache. Hey, $199 is not that bad. And you head right into the shark tank.

Then they drop it on you - the payment is actually $199 every two weeks, not monthly how you thought probably. But hey, since you’re here, why don’t you sit inside the vehicle, smell the new car smell, have a muffin on the house, and stew in your lust for a new car. And while you’re playing with neat buttons and gadgets, the inside voice in your head takes over - “Well, even if it’s twice a month it’s not that bad, right?”

You’re not quite correct - it’s every two weeks. And if you think you can stretch your budget to pay $199 every two weeks, look up in the calendar two special months that have five Fridays. That means there are two months in a year where you’ll have to pay it three times. I bet these will be your favorite months!

And the sad thing is this kind of advertising really works. Sure, it might not work for more sophisticated buyers who can use a calculator, but we all know there’s a whole bunch of people out there who are not very sophisticated. If it wasn’t working, dealerships wouldn’t use this tactic to get us through the door. Same with tacky balloons, a giant gorilla on the roof, and butt-ugly newspaper inserts. All of them work, sadly.

While we’re on a subject of sleazy advertising

There’s a very good chance you’ll see this sign at the same dealership as well:

Once again, the skull and bones symbol flashes. Dealerships are not in business of helping people; they’re in business of making money. Sorry to pop your bubble.

They’ll finance you even if you fall into any of those categories, all right. Of course, if you’re a high-risk borrower, they’ll charge for that risk as well. While your neighbor Jim whose credit history is perfect might qualify for 2% financing, they’ll charge you up to 25% interest for this car - you’ll be paying double the price tag after the dust settles. How is that for help?

Dealer gets to move a brand new car off the lot and a nice referral commission from the bank.

Bank gets a juicy 25% auto loan on the books to boost its profitability.

And you are stuck with a high auto payments coming out of your bank account every two weeks for the next 5 years.

Don’t get me wrong!

I’m not against dealerships and brand new cars. I’m not even against banks. And I’ll be the first to say that all responsibility for making these decisions are on the consumer, so let’s not start the blaming game.

But I am very against sleazy advertising, bait and switch tactics, and giant gorillas on roofs. Advertising should be honest - “This car costs $30,000 + financing charges!”. Bait and switch tactics should be banned. And giant gorillas? They’re plain scary and should not be used anywhere near babies or pregnant ladies. May be then people who have no business buying brand new cars on credit won’t be going anywhere near dealerships and doing what actually makes sense - buying cheap used cars with cash saved up until they can actually afford more expensive cars.

And seriously, enough with giant gorillas.