Sometimes I wish I could travel back in time and tell the younger me ten facts about money. I’d probably also tell myself to buy Microsoft, Apple, and Warren Buffet stocks. But I could never find a flux capacitor for my Jetta, so instead I wrote them down hoping it will help somebody else. 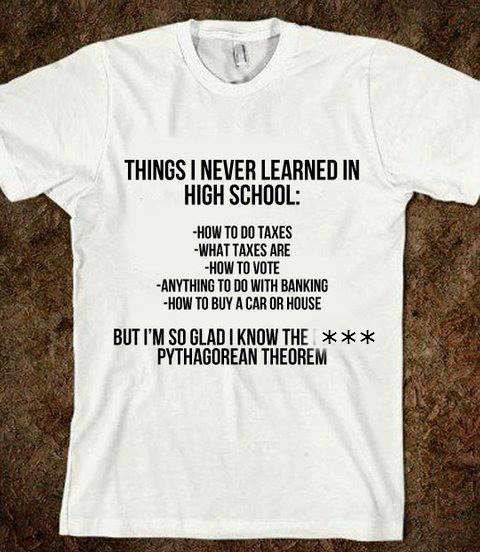 1. You have to pay attention to your money. Otherwise your money will leave you.

Unless your cupboard contains stacks of dollar bills instead of food (in other words if you’re not stupidly rich), you need to know where your money is coming from and how much you’re spending. Simply checking your bank account to see if you have enough money before you buy a sandwich doesn’t keep you informed. You need to control your money, or the lack of it will control you for the rest of your life.

I once talked to a fella who paid double rent for a number of years due to mistake his property management company did. He never noticed it because he never bothered to check his account statements. While he enjoyed a very decent income, he never knew how much money he is spending. Only after running into financial issues the mistake became obvious, but he could have wasted a lot of money until he discovered it himself (if ever).

2. Almost everybody wants to take your money away from you

At the present time, advertising is everywhere. While we might be used to it on Internet or radio, marketing companies are coming up with more and more ways to sell us more stuff. Video game makers now sell advertising space in video games. Your local pizza shop puts advertising for local real estate companies on pizza boxes in case you are so hungry that you want to buy a house. After consuming few beers at your local bar, you head for the washroom and end up staring at beer ads on the wall. Oh, the irony…

There’s a war for your wallet going on 24/7. Be aware of it, pay attention to sleek marketing schemes, and don’t fall for advertising. Your personal and family needs should be dictating your spending habits, not advertising.

3. Wealth is not evil

Books and movies teach you stereotypical knowledge about money. Rich people are not all jerks, and poor people are not all gold-hearted. Portraying them this way helps to sell more books and movies, but it’s far away from reality. Money doesn’t turn anybody into jerks. Money just intensifies people’s desires. If somebody has a heart of gold, they’ll spend money helping people around them - not matter how much or how little they have.

4. Looks can be deceiving

Just because somebody has a shiny new car doesn’t mean they’re rich. Just because somebody rides a bicycle to work doesn’t mean they’re poor. Don’t judge book by its cover, and don’t judge people by their appearance. You’ll be surprised how many seemingly well-to-do people bounce credit cards, and how many seemingly blue-collar folks can live without income on their savings for years if they were to lose their jobs.

5. Forget about getting rich quick

If there was a legit way to get rich quickly, everybody and their uncle would be doing it.

Younger me went through a lot of crappy jobs. I washed cars for living, cooked burgers, delivered Yellow Pages, and cleaned houses. Not exactly dream jobs - and keeping this in mind, I didn’t try to be anything above average. ” - Why bother?”, I thought. “- When I get that cowboy-astronaut-millionaire job, I’ll be an absolute rockstar! But this job is just for getting by at the moment, no need to show off.”

Now I see how wrong I was. If you work like a lazy sloth (and sloths are pretty lazy since they sleep up to 18 hours a day), nobody will ever offer you that dream job. Be awesome at what you do - even if it’s flipping burgers or waiting tables. The next customer you wait on might end up leaving his business card asking to call him for an exciting position - after you blow him/her away with your people skills. Only the best people get noticed - because they stand out.

Ever heard of the infamous “rainy day”? It’s coming. Be prepared for it - have insurance in place, have emergency fund set aside, have wiggle room with your money. While some people might say “You have to stay positive!”, I can positively say the rainy day will come.

There’s nothing wrong with owning nice things! But you have to look at how they affect your money beyond just one purchase. Big houses usually come with higher property tax bills, higher utilities, and more time wasted on cleaning it (or money spent on cleaners). Luxury cars feel great, but most require premium gas (expensive!) and higher insurance premiums (expensive!). Your new TV will require gold-plated audio cables - or at least that’s what the sales guy will suggest.  Even a cute puppy comes with an array of expenses -  not matter how cute it is.

9. Humans are creatures of habits

Habits will play a huge role in your life. Most of the things you do are very habitual - from food you eat to the way you dress. For example, I’ve had the same thing for breakfast for the last few years - oatmeal with raisins or fresh fruit. I can almost make it blindfolded - but don’t do it fearing my wife will make me clean the kitchen.

While some habits are harmless and won’t affect your life, some habits can be absolutely devastating to your finances or life in general. Habitual smoking or gambling come to mind right away. At the same time, you can pick up some good habits that will benefit you along the way - preparing a monthly budget or making your own morning coffee will make it feel like you’ve got a raise.

10. Be aware of small expenses and fees

Small expenses add up over time. An occasional late payment on your Visa card translates into few hundred dollars paid to the bank over a year. Satellite radio - which you haven’t used since you bought your new car - only costs few dollars a month, but once again adds up to substantial amount of money. ATM fees, morning coffees, iTunes purchases, online games, etc. all cost very little and something along “Oh well, it’s just 99 cents!” passes through your mind when you buy them. But feel free to add them all together and look at how much money is leaving your wallet.  Death by a thousand cuts, eh?