Feels like just few weeks ago we had to get used to dating things with “2015”, but the year 2015 is already over. It’s a new year upon us, 2016. What marvelous events will take place? What future trends we’ll discover?

Here are some of my predictions for the next year. You heard them here first, y’all! 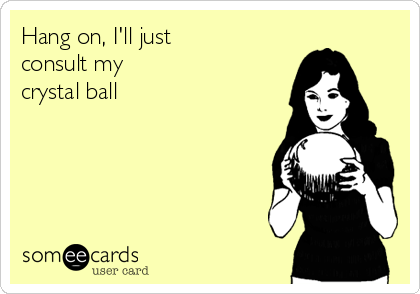 - More and more people will go into debt. Because we never learn.

- Student debt will go even higher allowing anybody to pursue higher education without thinking too much whether or not they’ll have a good return on investment in a form of well-paying career later on. Your next Starbucks coffee might be made by somebody with PhD in History of Animal Advocacy.

- Oil prices will continue to slide down, but not as drastically as during 2015. We’ve all been wondering if the world will end when oil prices dip below $50/barrel. Now $50 will look like a huge amount of money per barrel and it will be regarded as “good old times” among oil investors.

Incidentally, prices at your local gas stations won’t go down. Because somebody has to pay for Exxon’s CEO $40 million salary and $0.73 per share dividend. By the way, I own some Exxon shares, so thank you.

- Commodities’ prices will also slide. People who were investing their money into gold bullions and proclaiming how gold is the best investment ever will quickly change the subject if you bring it up, but a slight sadness in their eyes will become apparent. May be even a small tear will run down their cheek.

- Some big name company will go bankrupt. It will be proclaimed as symbolic and more people will become doomsday preppers and wait for The End of Days while stocking ammo, seeds, and gold. The business of selling ammo, seeds, and gold will get even more profitable. Who knows, we might even see a preppers’ supplies company go public.

- Apple will come up with a new toy that EVERYBODY has to have. Perhaps a computer chip that will be implanted so you can watch kittens on YouTube just by closing your eyes and check your Twitter feed in your sleep. Technologically it will be a revolution, but they way it’s used will be pure shame. Just like Internet, e-mail, and cell phones.

- Another social media will be invented. As somebody who is hopelessly behind times (I just discovered Twitter two weeks ago), I’m already lost between Pinterest, Periscope, Facebook, and Vine. I bet it will be mobile app for uploading photos of your ear wax samples for people to admire  online. Justin Bieber will have the most followers.

- Star Wars will make a gazillion dollars. Star Wars will become this generations’ Harry Potter and Lord of The Rings combined. Being a Star Wars nerd will become cool for a foreseeable future. People who don’t pay attention to movie hypes and never seen a single Star Wars movie will be regarded as “outcasts” and will be sent beyond city limits. I will miss Mrs. Financial Underdog who has never seen them, but I’ll look the other way for the fear of being the next one.

- People will finally figure out something I’ve known a long time - zombie movies suck. This whole “zombie” trend in the form of countless zombie movies, computer games and TV shows will finally fade into history and be replaced by something even lamer - like action movies about vegans.

- Donald Trump will continue to be the most entertaining presidential candidate ever. And I don’t even know other candidates, or follow US politics in general. This guy is hilarious.

- Here in Canada people will complain about all sorts of problems without realizing that it’s the people outside of North America and Europe that are really suffering and compared to them we are entitled babies who should not be complaining about anything. They have wars, genocide, and hunger. We don’t know which piece of the pie eat first. But we’ll still complain, because it’s our right, dang it!

- Politicians and TV celebrities will continue to have virtually zero effect on our everyday lives but will be the most talked about subjects. At the same time things that really matter - such as investing for the future, paying off your debts, and making smart decisions with your money - will be nowhere near being popular. A paradox of sorts.